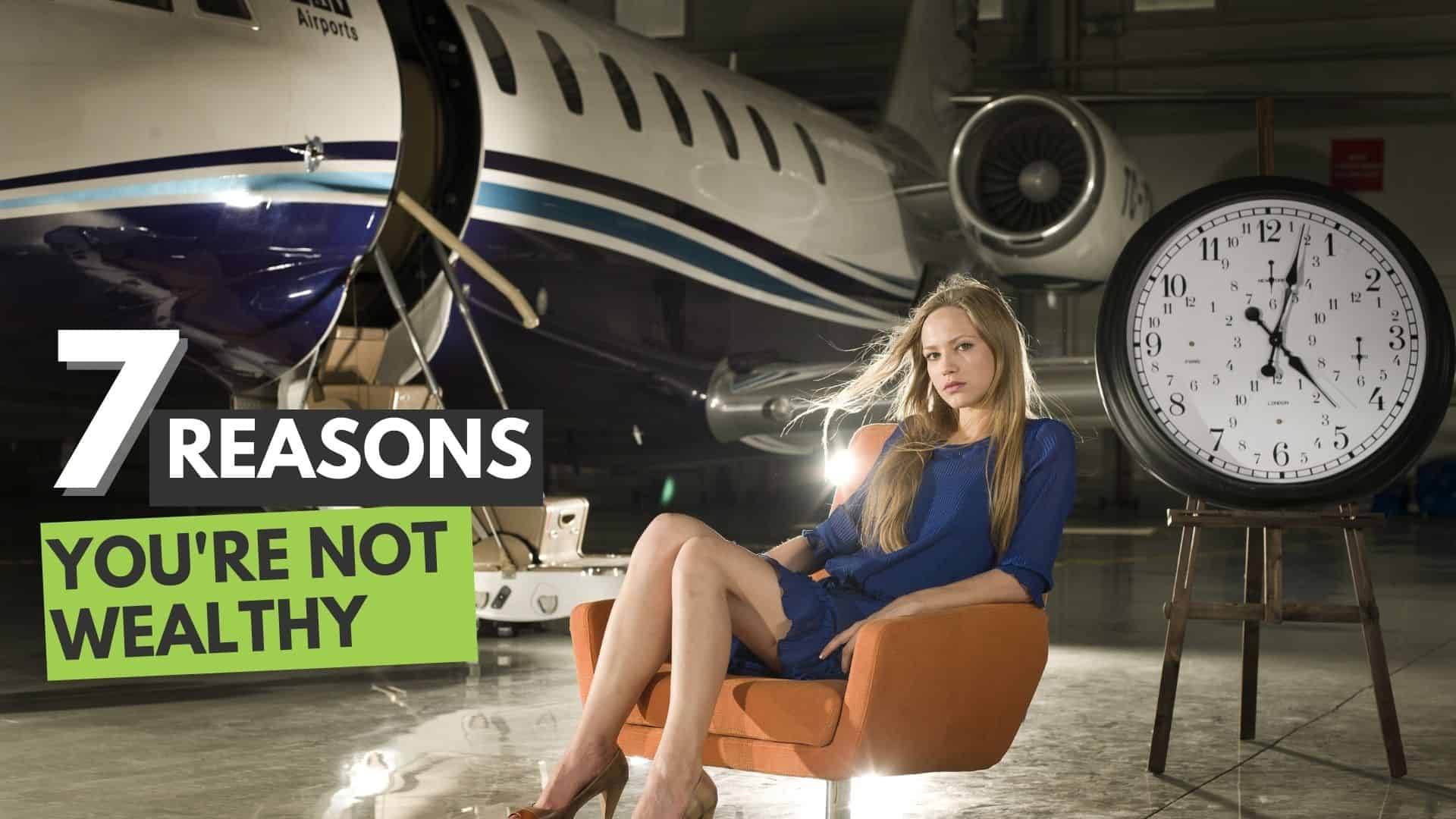 Table of Contents hide
1 1. You Weren’t Lucky / Born into it
2 2. You Don’t Understand the Wealth Mindset
3 3. You Have too Much Debt
4 4. You’re Spending Money on Unnecessary Luxuries
5 5. You Don’t Respect the Power of Money
6 6. You Suck at Financial Commitments
7 7. You Don’t Believe in Yourself
8 Adjust Your Wealth Mindset

Aside from luck and inheritance, it generally takes a specific kind of person to generate their own wealth. What is it that these wealthy individuals are doing that you’re not? Do you ever feel like you give it all you’ve got yet have still missed some step along the way?

Whether or not you share some of the same personality traits of the wealthy, there still may be a missing piece to the buzzle. Let’s take a look at 7 reasons why you are not wealthy.

Let’s get the first and most obvious reason why out of the way first. There are a good chunk of wealthy individuals who have never had to work for a single penny in their lives. Or maybe some of them used to work for minimum wage and bought a winning Powerball or Lottery ticket.

Should they be treated with the same respect as those who earned their own wealth? Well, that’s another topic for another day, but the ones who did earn their wealth should most certainly be respected in one way or another.

We do know that every single rich person out there who didn’t get rich by being lucky (winning money, having a wealthy family, being in the right place at the right time, etc..) has had to go beyond working hard. They have to undergo an entire personality change to better fit into the wealth mindset.

2.   You Don’t Understand the Wealth Mindset

One of the most common reasons that many Americans aren’t wealthy is because they are drowning in debt. (Consumer debt, to be exact. Many wealthy businessmen used debt to their advantage, but that too is another post for another day)

All too often everyday people and budding entrepreneurs dream of being successful so that they can pay off their debt. It takes some serious compound interest and a lot of time for the 10% yield from your investments to overtake those 22.9% credit cards.

The whole idea behind being wealthy is to amass a hugely positive net worth. Every single time you borrow money with the promise to pay it back, it negatively affects your net worth. Pay off the debt first and try your hardest to avoid going back into debt. Add to your net worth, don’t subtract from it.

Your money can’t grow if you spend it on items as if you were already super rich. Spending money on things you either don’t need or can’t afford is a great way to kill your own wealth before it even starts properly growing.

Bill Gates waits in a line for a $7 haircut. Warren Buffet still lives in the same house that he bought for $38,000 in 1958. This isn’t to say you can get rich by getting a bad haircut, but more so to point out how deep the wealth mindset runs. Just because you can afford it doesn’t mean you should get it.

Luxurious spending is, more often than not, a compulsion. If you can’t break the habit now, you’re going to find yourself trapped later on in life. Sure, it brings immediate pleasure now, but can have devastating long-term effects.

5.   You Don’t Respect the Power of Money

Many people are raised to believe cliche sayings like “Money is the root of all evil” and “Money can’t buy you happiness.” If you believe these things then there’s no way you can properly respect money and truly get into the wealth mindset.

Sure, a powerful person with a lot of money can do some bad things. But there’s no way you’re going to amass wealth if you genuinely think that money is bad. Money is powerful. Something with so much power deserves respect.

Money isn’t bad. Alternatively, money isn’t necessarily good. With that being said, there’s nothing wrong to have a strong desire to gather more wealth. And, yes, money can’t buy happiness for some people but it can sure make life a lot more comfortable for you and your loved ones.

6.   You Suck at Financial Commitments

Sorry to be so blunt, but some of you are absolutely terrible with this. Now, we don’t mean commitments in general. You may happily have been in the same monogamous relationship for 25 years, but that doesn’t mean you’ve got the discipline to do very simple tasks like stick to a budget or make proper contributions to your retirement accounts.

Take a look at where you are in life right now. You’re not rich, are you? So why do you think you can keep doing the same thing day in and day out while still dreaming of being wealthy? You have to change the way you look at financial commitments today or tomorrow won’t be any better.

The only exception to this rule is for those that want to keep doing whatever it is they do while they dream of winning the Powerball. If that’s the financial mindset you’ve got for getting wealthy, then you just go ahead and keep doing that. For the rest of us, however, you need a complete overhaul with how you prioritize your financial commitments.

7.   You Don’t Believe in Yourself

We’re going to end this list with the most important point. Many people dream of being wealthy but they simply just don’t believe in themselves. They may think they aren’t smart enough. They may be afraid of success. They may even feel like they don’t deserve the money.

There is absolutely no correlation between wealth and IQ, and there are plenty of rags-to-riches stories out there. As we’ve mentioned previously though, there are correlations between certain personality traits and wealth. Amongst those traits are narcissistic extroverts who wholeheartedly believe in themselves and know (not just think, but know) that they deserve the wealth they’re amassing.

5 Personality Traits of the Ultra Wealthy

Secrets of the Wealthy: 13 Habits