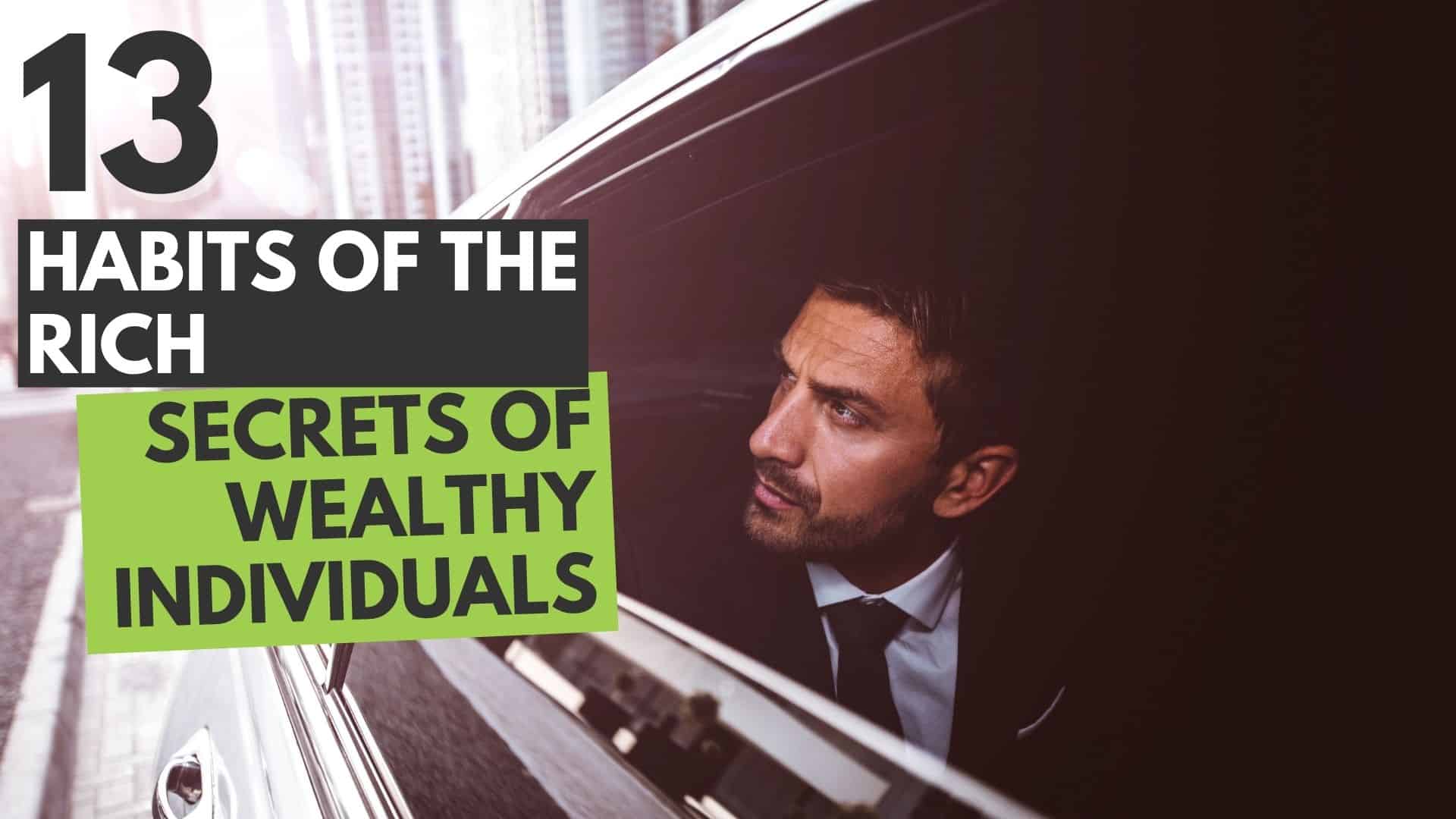 Those of you that have been following our Wealth Psychology series know that rich people literally think differently than the rest of us. For wealthy individuals, it’s like they were born with their brains wired a certain way, or they somehow learned these personality traits over time.

But aside from how they think, do wealthy people act differently than us normal people? The answer to that is a resounding YES! Wealthy people have little differences in their daily routines that set them apart from the rest of us.

It turns out that, in addition to motivation, hard work, great decisions, and a little bit of luck, most rich people share a lot of the same daily habits. Just what exactly are these daily habits of the rich? And why do these habits set them apart from the rest of us? Well, let’s dive in and find out!

Rich people eat much healthier. Thomas Coorley spent 5 years covering every detail of the lives of millionaires around the world. His findings estimate that  54% of wealthy individuals count calories, whereas only 5% of poor people do. Sure, having money lets you buy better quality food, but being poor doesn’t mean you can’t watch what you eat.

Additionally, one of the next most common healthy habits of the rich is that they regularly exercise. In fact, an estimated 76% of millionaires exercise at least 4 times per week, as opposed to just 26% of those not wealthy.

Millionaires undoubtedly lead busier lives than the rest of us, and sleeping in isn’t an option for them. (Well, not for most of them. I’m sure there’s some tech billionaire somewhere that gets to sleep until 1 pm every day.)

For ordinary people who work a typical daytime or “9-5” job, only 3% of us wake up more than 3 hours before our work starts. I know most people reading this are probably thinking, “Duh, why would I wake up at 5 am if I don’t need to go to work until 8 am?”

It turns out that nearly half of all working millionaires (not celebrities) out there wake up 3 hours or more before they actually need to begin their workday. During this time, what they actually do varies: exercise, meditate, read, do yoga, or even work on a project unrelated to the work they’re about to start later that day.

Setting goals can undoubtedly lead to success if you have the discipline to follow through and meet or exceed those goals. Now, we mean specific goals here, not something like “My goal is to be rich one day!”

An example of a more specific goal could be “I want to get to a point where I can afford to invest $x each month aggressively.” or “I need to sell X units at n% profit margin over the next 6 months.”

In addition to just setting goals, one of the habits of the rich is that they can focus on the goals that they set. Only 12% of ‘normal’ individuals go about their day-to-day lives with a primary goal or objective in mind.

Among individuals with a 7-figure net worth or higher, 88% of them read at least 30 minutes per day, every single day of the week. Reading serves two purposes. First, it’s a great way to relax your mind and tune out from the nuances of life. Second, it’s a great way to gain more knowledge that can further your career, business, investments, and overall earnings.

So just what do rich people read? According to Coorley:

81% of millionaires admit that they are maintaining or working on a to-do list at any given time. Compare this to just 19% of poor people who say they may create a to-do list at least once per month.

As we mentioned a few points above, one of the most common habits of the wealthy is that they are very goal-oriented individuals, and to-do lists can play a huge role in that. Additionally, studies show that creating a to-do list before bed can keep out unwanted thoughts that can cause anxiety and prevent a good night’s rest.

6. Believe It Or Not, The Rich Wholeheartedly Believe In Volunteering

In fact, 70% of wealthy individuals claim that they get their kids to volunteer at least 10 hours or more each month because that’s what their parents did for them. Compare this to only 3% of lower-income families that encourage their children to volunteer in any capacity at all.

Children of wealthy individuals may also need a check on their humility, and volunteering is a great way to keep them from getting the spoiled rich-kid syndrome.

7. Wealthy Individuals Live Within or Below Their Means

A common trait among wealthy individuals, especially those with self-made wealth, is that they live below their means. Not even just within their means, but below their means. They understand that just because you have the money doesn’t necessarily mean you can afford to spend it.

To go back to an example that we’ve used previously: If someone makes $1,000,000 per year and spends $1,000,000 per year, they are not wealthy. They are broke. The people that become wealthy and then properly sustain that wealth do so by living modestly, especially in the early stages of their riches.

8. The Richer You Are the Longer Your Lunch Breaks May Be

It’s no secret that millionaires understand time is valuable. Time is money. With that being said, one of the work-day habits of the wealthy is that they take long lunch breaks. As we mentioned above, they wake up super early. When it’s time to work, they WORK.

They work smarter, not harder. Even though they aren’t doing physically exhausting and laborious tasks, they still need a good chunk of time to unwind. Many millionaires take lunch breaks that are at least an hour, but usually more.

By giving your brain a chance to decompress halfway through the day, you can relax, collect your thoughts, and hit the ground running when it’s time to attack the latter half of the day.

9. Do Rich People Gamble A Lot?

No, absolutely not! Of those with a 7-figure net worth or higher, maybe a quarter of them will gamble about once or twice per year for entertainment purposes. They respect money and understand that gambling should be done for fun, and only with money can you afford to lose.

Individuals in the U.S. with an income of only about $1,000 per month will, on average, spend 10% of their entire income just on lottery tickets. On the surface, $100 bucks per month may not seem like much, but it’s a lot for someone who only brings up $250 per week. Could you imagine a millionaire spending 10% of their income just on lottery tickets?

Now for probably the most wholesome one on our list of habits of the rich. 8 out of 10 millionaires in America have a list of friends and family members’ birthdays and make it a point to, at the very least, call and wish them a happy birthday.

The less money you make, the less likely you are to pick up the phone and call somebody to wish them a happy birthday. The same study found that only about 1 out of 10 poor people regularly wished others a happy birthday. (The results for middle-class individuals were mixed).

How is this information beneficial to us regular folks? Well, wishing someone a happy birthday can bring you closer to them. It can help you form a nice, meaningful connection with them. Statistically, those that are happier and have healthier connections with those around them make much more money than those who don’t

Because wealthy individuals understand that not only is their time valuable, but it’s important to stay as relaxed, happy, and humble as you can throughout the day. This is going to sound like another one of those hard-to-believe facts, but only 6% of millionaires out there admit to always saying what’s on their mind.  The other 94% bite their tongues and move on.

To show some contrast to this one, 43% of middle-class individuals admit to speaking what’s on their mind, and almost 70% of those who are poor will admit to always speaking their mind without filtering what comes out.

This doesn’t necessarily mean they teach their kids some sweet investing tips, but more so habits similar to those we’ve discussed so far. They may encourage their kids to read daily or show them how to cook a healthy meal. They might get them to exercise or teach them the importance of saving early.

Speaking of saving early, it’s a good habit to teach kids the fundamentals of money early on. Your teaching can cement children’s ideas of money into their minds as early as 7 years old.

If you’re keeping healthy mentally and physically, using your time wisely, being smart and efficient with your money, networking with and being cordial with other individuals, and always wanting to further your knowledge, then how could opportunities not present themselves sometime in the future?

We will even go so far as to say that even if the habits of the rich that we’ve listed here today weren’t going to make you more wealthy, they’re still good to follow. Even if you’re not rich, it doesn’t hurt to take care of yourself, be fiscally smart, and be a good person overall.