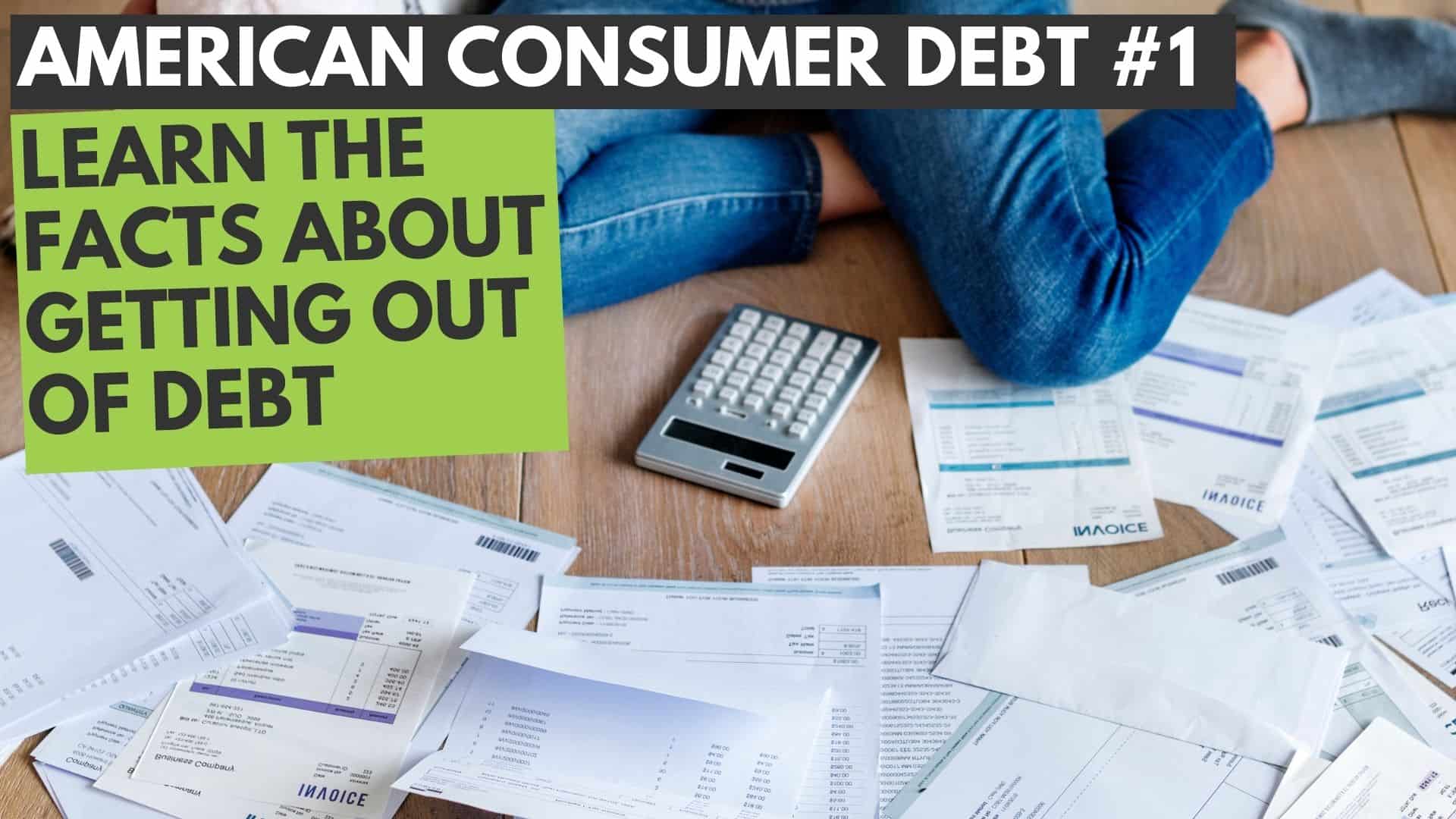 Table of Contents hide
1 American Consumer Debt: A 7-Part series to get out of debt
2 Let’s get started with the facts
3 It was only a matter of time.
4 Sometimes debt can be a good sign.
5 Having debt is normal, but it should be manageable.
6 Take control of your debt.

American Consumer Debt: A 7-Part series to get out of debt

American consumer debt is a large part of the lives of most Americans.  Consumer spending and debt are at an all-time high, and if you do not have good control of your finances, it can get the best of you.  Over the course of the next week, we will take a deep dive look into the world of American consumer debt and discuss strategies on how you can take control of your debt.  The topics will be broken into 7 parts, focused on a key concept each day. Below is a list of the key topic areas.

Let’s get started with the facts

Out of 209 million Americans aged 18 and older, 189 million of them alone have credit cards. Not all consumers are necessarily drowning in credit card debt, but the average household balance on credit cards is about $8,398.

That’s just the number for credit cards and does not include other forms of debt such as student loans, car loans, mortgages, medical bills, or payday loans. As of the most recent U.S. Treasury Department calculation, American consumer debt is about $14.3 Trillion. Yes, Trillion with a ‘T.’ It’s almost safe to say that having debt in America is a way of life.

It was only a matter of time.

The data above was calculated on March 31st, 2020 (And released May 5th, 2020). Because the calculations don’t include April or May, the Covid-19 pandemic’s true effect on debt likely hasn’t been fully calculated.

Up until the end of 2019, Americans were merely treading water in a sea of debt, barely keeping their heads up. More than 40% of America was just one or two missed paychecks away from having their home foreclosed on or having their vehicle repossessed.

All it took was a worldwide pandemic to start making many consumers drown in that sea of debt. Some consumer debt is normal, and a fair amount of certain types of consumer debt can actually be a good thing. But the current crisis has seen many Americans maxing out credit cards, taking out more loans, and even turning to predatory payday loan companies.

The previous peak of debt was $12.68 Trillion during the 2008 financial crisis that saw many Americans struggling to stay afloat. The new peak is dangerously high. And it’s even more dangerous when you consider that April and May of 2020 are not calculated into the newest figures.

As much as I want that above sentence to say, “Sometimes debt can be a good thing.” It’s just so hard to type out in today’s climate. But, some debt can be a sign of good things. (Sometimes… I’m just looking for a silver lining here.)

Mortgage debt is another example of a good sign. When national mortgage debt figures are on the rise, it means more and more Americans can afford and move into their own homes. As of right now, mortgage debt makes up for an overwhelming percentage of all consumer debt. Out of that $14.3 Trillion we mentioned above, $9.7 Trillion of it is from mortgage debt. The median credit score for these mortgage borrowers was 773. That’s good too.

Having debt is normal, but it should be manageable.

If you’re in your 20s or 30s and you’ve got a mortgage and some student loans, then, statistically, you are doing pretty well compared to other American consumers.

However, many Americans are not living in the scenario where they graduated college, owe some money on the loans paid for that college, and are using the job from their higher education to buy a new home. Even those that are living this scenario are likely to have many other forms of debt.

Having normal amounts of debt is a world of difference away from living paycheck to paycheck because the monthly minimums on your credit cards are too high. Or from your mortgage payment is so high that you can never save up to weather any storms that may come up in the future.

Take control of your debt.

In this 7-part series, we’re going to take you through some of the strategies used by finance professionals to help people get out of debt and get their life back on track.

So whether you’ve got insurmountable medical debt, your house is on the brink of foreclosure, you can’t keep up with credit cards, or you want to find a faster way to free yourself from your monthly obligations, you may want to stay tuned.

The first installment of our debt-management series will cover some of the most effective strategies that finance gurus use to pay off debt quickly.

Best Ways To Pay Off Debt?